There’s something about packing up before a backwoods trip that makes me a bit fizzy. The checklist, “do I really need this”, and the eternal question: “is this enough socks?” My friend (Eric) and I are heading up to Algonquin for a short winter camping trek on the Western Uplands trail. The forecast says sunny and cold for day 1, then warm and slightly wet for day 2 (ha ha).

The drive up is great… until we hit Bracebridge and run into a blizzard. Suddenly, we’re driving 50 km/h and it doesn’t look like we’ll make the park gate by 4PM (last call for trail permits). But we’ve come this far, so we push on. However, now that we realize how much snow is on the ground (2+ ft.), Eric calls ahead to book snowshoes.

Side note: if you’re camping in Algonquin past mid-November, snowshoes will be mandatory.

Thankfully, the traffic and roads clear up, and we arrive at the park gate at about 3:30PM. After several skeptical looks from the warden (“Do you have headlamps? There’s only an hour of light left.”), we fill up on water and head out. The sun is well below the tree line, although there is still enough light to strap on the shoes and ration out some amber liquid before hitting the trail. With the late start, there is a well-established trail for us, which is nice, given that the trail markers are covered with snow in many spots. Five o’clock hits and it’s as if someone turned off the lights. We stop for granola bars, chug some water, shed a layer, and keep trekking. 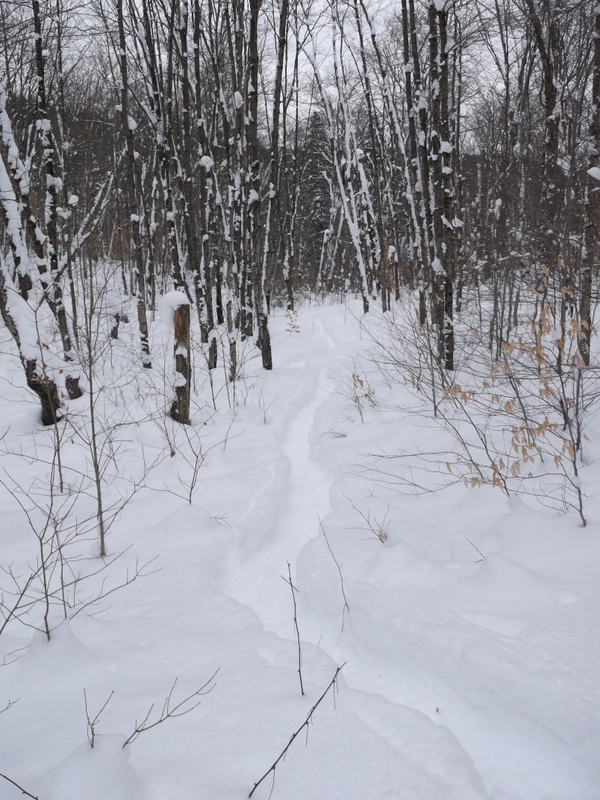 Surprisingly, snowshoeing after dark is fairly simple, although the creek crossings become dicier. There is also something to be said for headlamps and fresh powder; you can’t walk through it and not enjoy the beauty of nature. At ~5:30, we pass the first set of trekkers, whose pulk had carved out a nice trail for us. The rest of the trail is pockmarked with holes from a group that is hiking in boots. About 30 min later, we pass the boot-crew’s site, and we’re on our own. The plan was to push to Ra-Mo-Na Lake, but this is no longer realistic, so we settle down beside Gus-Ke-Wau Lake. Upside: water is available, which allows us to avoid melting snow the next morning. 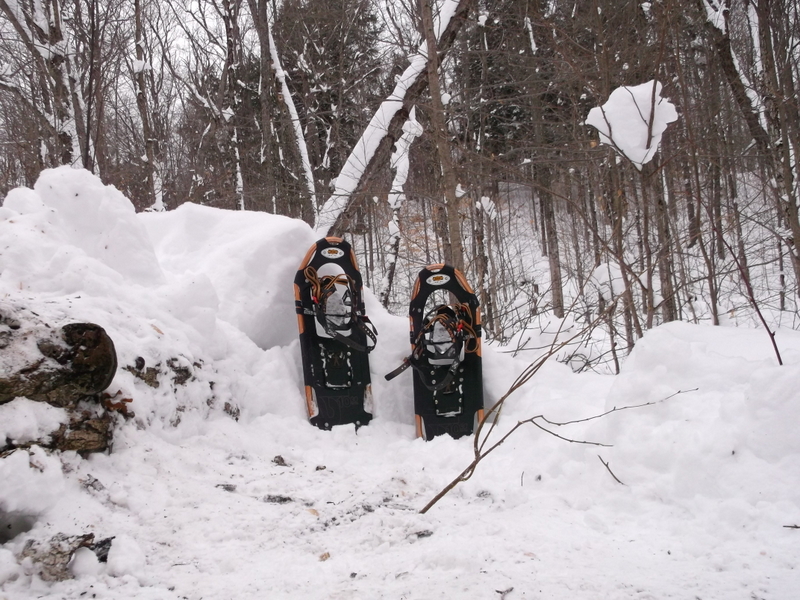 Setting up the tent

First up is tramping down a footprint for the tent, which takes about 15 min of walking in circles. After unpacking, we gather wood for a fire and I pull out the food prep gear (i.e., pot and a one-burner stove). Despite our “knowing better”, we haven’t considered the fact that our fuel (Power Gas) isn’t recommended for temperatures below 0°C, and a half-full canister at -10°C is even less effective. After some snuggling with the canister to warm it up, we get the water boiling, and “cook” dinner. The freeze-dried pasta and chili are surprisingly good, and provide a nice re-charge.

We settle around the fire to warm our toes and chat about how much different summer and winter trekking is. The cold starts to get the better of us, so we layer up and retire to the tent. Eric has thought to bring an emergency blanket, which he puts between his sleeping pad and bag. Apparently it works well, as he sleeps “comfortably” through the -16°C night, while I wake up shivering twice. 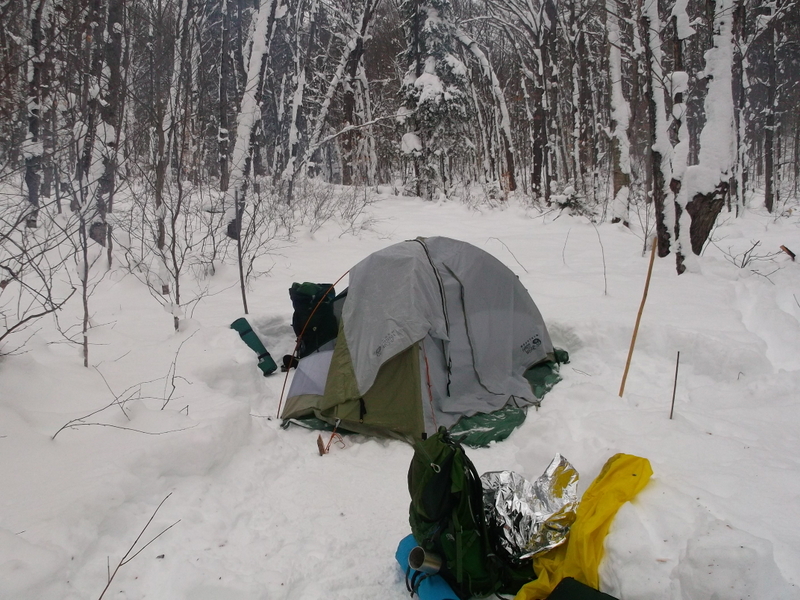 The next morning is irritating, as the sweat in our boots and laces has frozen solid. Desperate for coffee, we get a fire going and prep breakfast. Between this fire and the one from the night before, the “fire pit” has sunk about a foot into the snow, despite building a log floor each time. To allow the fire to breathe better, we dig a channel at a 45° angle in the snow, and the fire crackles back to life. 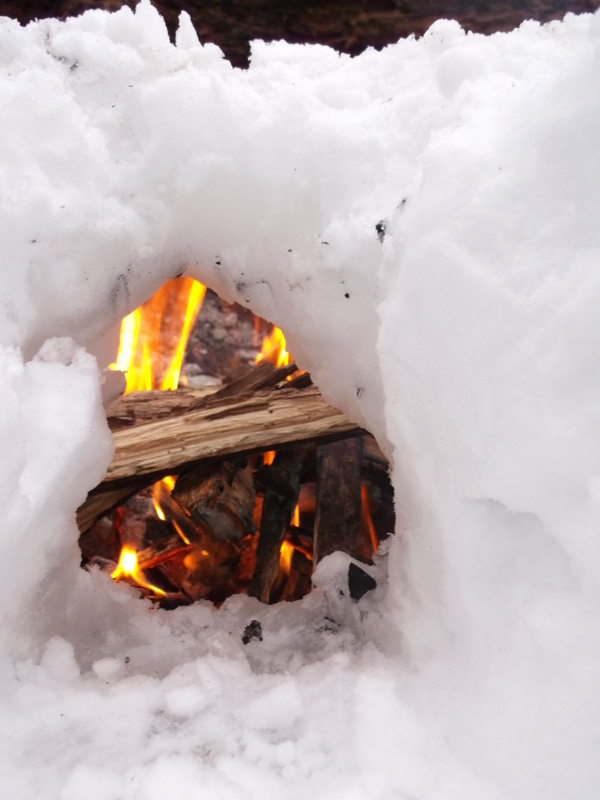 Tear down is fairly quick, as the cold motivates us to get moving as soon as possible. Unfortunately, the weather is significantly warmer than last night (~0°C), and the snow is starting to get soft. Based on the forecast of rain, Eric and I opt for discretion as the better part of valor. Thankfully, we make it to the car about 15 min after the rain sets in, as it turns the trail into soup. Once we’ve warmed up, we agree that (despite the last minute changes) the first stab at winter camping worked out well.

Patrick Mott is a professional medical writer/editor, and a part-time gear and adrenaline junky who loves to pack light and push boundaries in the backwoods.