Purchasing a second-hand trailer earlier this spring provided the impetus for my partner and I to get out and see some of the parks on our never-been-to list. Though we’d visited Sauble Beach a few times when a family member had a cottage there, we’d never camped at Sauble Falls Provincial Park and had long been curious about what it had to offer. Sauble Beach really gets hopping in the summer, and we prefer things a little quieter, so we opted for a June visit.

We arrived at the park on a Wednesday after a four-hour trip, pulling in at the gatehouse just after 5 p.m. A note taped to the window alerted us to the fact that office hours were over. No problem, we had a reservation, so after picking up a park information guide we proceeded to our site.

Pulling into our site was relatively easy, with lots of clearance and a good straight line to back up the trailer without encumbrances. Our particular site, Site 100, was level, with privacy provided on three sides by a tall, thick cedar hedge. We could even glimpse the Sauble River through the trees.

We’d elected to stay on the East Campground, since the sites looked more spread out than on the West side, particularly when it came to the electrical-serviced locations. As we strolled over to the comfort station and checked out some of the other sites available, we felt we’d made the right decision. While sites offered varying degrees of levelness and privacy, they were, for the most part, reasonably spacious.

There was also a small wooden dock joined to the riverbank a few metres from our site. During our stay, we saw several campers coming and going with kayaks and canoes, so it got good use.

After supper, we decided to take a quick walk over to the upper end of Sauble Falls. Though there’s a paid parking area for day use, we didn’t need to take the vehicle—it was a short stroll from our campsite. All we had to do was go out the park entrance and cross the Sauble Falls Parkway and we were at the top of the falls.

We made our way across the bridge to read information boards outlining the history of Sauble Falls and the previous uses of the Falls to power a sawmill and provide hydro-electric energy. There are some picnic spots near the top of the falls and at a quiet point upriver, and we could hear the muted roar of the falls themselves. With dusk approaching, we opted to head back to our site and save the trip along the southeast portion of the falls for the next day.

Checking Out the Falls

Thursday dawned sunny but cool, which we didn’t mind since earlier in the spring there’d been a bit of a heat wave. The relative inconvenience of finding the gatehouse closed on arrival was balanced out by the fact that staff delivered our receipt, our reservation slip, and our vehicle pass to the site on Thursday morning.

After breakfast, we crossed the Sauble Falls Parkway, and this time we made our way downhill along the southeast side of the falls, following a combination of paths and wooden stairs.

Viewing platforms provided vantage points along the way, but for my money, the best view of the falls was from a clear area on the shore at the bottom of the falls. From here, we could look up to the left and see the water cascading over the step-like rock formations.

We made a note of the numerous picnic tables scattered around in the area, and paused to take a seat to relax, take in the view, and listen to the rumble of tumbling water.

When we’d had our fill, we walked along the shore to catch the stairway leading to the West Campground. A number of platforms along the way provided an opportunity to rest the legs, a feature I appreciated since I’m still recovering from knee surgery a few months ago. The climb was gradual enough that I was able to handle it with ease.

Turning to the left at the top of the stairs, we checked out the large pavilion, the kids’ play area, and the comfort station, complete with a small laundry facility. Then we sauntered along the roadway to check out some of the West Campground’s serviced sites. Here, we found the sites deeper but narrower than on the East Campground. This portion of the campground was well above river level, and fences had been built at the back of the riverside sites for safety.

On the other side of the roadway, some of the sites backed onto ample green space consisting of a long, treed hill, with more elbow room between sites than on the river side.

Our exploring complete for the time, we headed back for lunch, then decided to tackle the 2.5 km Sauble Trail branching off the East Campground. One of the other campers had told us that the Trail provided a view of some impressive trees. Noticing that we required canes to assist with walking, he suggested we tackle the trail starting with the right-hand loop. It was the opposite direction to that recommended by the brochures available at the trail head, but this branch of the trail did prove to be more level, and therefore more suited to our needs, than the steeper up-and-down of the left branch of the trail loop.

The trail proved to be a foot-path suitable for walking single file, and somewhat overgrown in spots, perhaps because it was early in the season. Poison ivy made an appearance in several locations along the way, so I was glad I’d worn long pants.

No bikes are allowed on the trail, and I felt that given the winding and wooded nature of the path and the potential for unplanned close encounters with someone coming the opposite way that this rule made sense.

We knew from the start that we likely wouldn’t make it all the way around the trail, and were right. We turned around just before the half-way point and made our way back to the trail head. Still, we were glad we’d checked it out. It was nice just to be surrounded by trees, and the blue-sky day made it that much more pleasant. 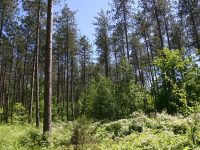 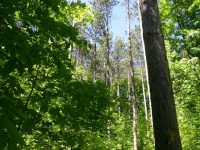 That night, we enjoyed a campfire under the watchful eyes of chipmunks and a seagull. Although there were other campers the sites were by no means full, and it was a quiet evening.

Friday morning was departure day for us. With the 2 p.m. checkout time, we were able to tackle the teardown of the campsite at a leisurely pace.

We made our way to the trailer dumping station, conveniently near the East Campground. It seemed cramped and congested compared to some other campgrounds I’ve seen, and the person ahead of us had parked in a way that blocked the road, so we had to wait until he finished, backed up, and went around the loop before we could get in. I was glad that we were here on off-peak and not during a busy weekend. Still, the facilities provided did the intended job, and we were soon on our way.

Overall, we counted our first campout of the year, and our first in our new trailer, as a success, and agreed we’d put Sauble Falls on the list of campgrounds we’d gladly visit again.